Got My Sports Shorts On!

Apologies for the delay since my last blog, but we finally started classes here at UCLA so my responsibilities have exponentially risen over the past few weeks! I feel like I am running 200 MPH all day, every day! SO… I’ll do my best to keep up with the real world throughout the school year. And by the way, my definition of the real world is the sports world. Here are my thoughts on what has been going on in the wide world of sports over the past couple of weeks: 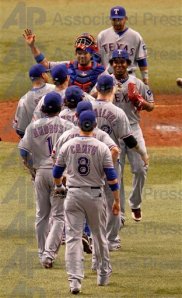 RANGERS: Holy Texas Rangers, batman! As the only major league team who has never won a playoff series, The Rangers are making the most of their 2010 opportunity. After putting a 2-0 chokehold on the Tampa Bay Rays this afternoon they are well on their way to the next round of the playoffs, a place they have only heard stories about. Going up 2-0 on the impressive Rays while playing in Tampa and heading back to Texas for Game 3 and Game 4  is HUGE. Cliff Lee was incredibly dominant in Game 1 and CJ Wilson only allowed 2 hits through his 6 1/3 innings of work today. The defense was stellar featuring Josh Hamilton (per usual) and the Rangers loaded lineup stepped up to the plate and delivered including third baseman Michael Young getting his first post-season hit of his career, a three-run homer in the fifth to crack the game open for the Rangers. While watching the last few innings of the game from my trusty elliptical in our training room, I was laughing out loud watching Wilson and Hamilton clown around with each other in the dugout once the game was firmly in their grasp. Josh was making faces at the camera while CJ was lurking unknowingly behind him throwing up bunny ears and the infamous antlers. It was an awesome display of how much genuine fun these guys are having soaking up every second of what could potentially become the franchise’s most successful playoff run to date. Well, what am I saying? They have already won a playoff game, so they have already upstaged their Ranger predecessors. I just love watching professional athletes when it’s clear that they REALLY ENJOY PLAYING. It’s not about the money or the fame for these guys… It’s about the game, hanging out with each other, and winning games. How refreshing! Keep it going boys, lemme see your claws and antlers!

COWBOYS: As outstanding as Dez Bryant has been on the field thus far, he finally got his pay back for his refusal to carry Roy William’s pads during pre-season training camp (See: “Dear Dez, You Have to Fit In Before You Can Stand Out”). During the bye week Bryant invited the offensive players out to dinner, on him of course, to (literally) pay his dues as the star rookie on the team. Much to Bryant’s surprise, not only did the offense show up…. so did the defense, on a special personal invite straight from Roy Williams. This was obviously the perfect opportunity for  the revenge that William’s spoke of a few months back. And he took full advantage of it. The ‘Boys ordered nearly every item on the menu at Pappa’s Steakhouse including numerous bottles of expensive bottles to go. Apparently the price for not carrying a veteran’s pads is, drumroll please… $55,000. AWESOME. Oh, and the Cowboys are 1-2. Meh.

BRUINS: I could definitely get used to this whole winning football games thing. The Bruins took care of business last weekend against the hapless, toothless Washington State Cougars winning 42-28 in front of the hometown crowd at the Rosebowl. It would have been easy to have a football hangover after the emotionall victory over Texas, but the Bruins scratched and clawed their way to a somewhat sloppy victory, which in my opinion probably wouldn’t have happened in previous years. Richard Brehaut got the start in place of Kevin Prince, who was experiencing some knee swelling following a hit during the Texas game, completing 12 of 23 passes for 128 passing yards and was poised under pressure scoring the go-ahead TD on a QB keeper in the 4th quarter. The lightning and thunder one-two punch of Jet Franklin (216 yards) and Derrick Coleman (185 yards) made their substantial contributions to the Bruins 437 rushing yards. I’m PRETTY sure we have found a solid identity in our running game, don’cha think? Kai Forbath made two field goals bringing his collegiate total completions to 80, just five behind John Lee who holds the school record with 85. A Bruin win, an SC loss, and a Stanford loss made reason for celebration on Saturday evening in Westwood! Hard work, positive attitudes, and guts are paying off. Let’s take it on the road to Cal this Saturday, Bruins baby!

Things Are Getting Hairy Around Here…

The new hot topic in sports: HAIR. In the Twitter world people would say: #sportshair. Things are getting hairy around here…

1. The new million dollar man: Pittsburgh Steeler TROY POLAMALU. No, really. A million dollars. His luscious locks are now insured by Head and Shoulders for ONE MILLION DOLLAR$. Cha-ching! Polamalu is not only the company’s spokesperson but apparently he really does use Head and Shoulders to shampoo and condition that ferocious head of hair. How does he even fit that mane in his helmet?! He hasn’t had a haircut in over 8 years and reportedly has a 45 minute pre-game ritual of treating his hair. What I want to know is how his hair still looks so damn healthy without even having a trim! And those curls, my God! My hair stops growing and the ends start to split after a while but Troy’s hair is still flowing. Maybe it really is the Head and Shoulders… Anyways, he won’t be cutting his hair anytime soon and those locks are now making more money than some of his young teammates. I think when he DOES decide to chop the mane it’s time for a serious donation to Locks of Love. I mean, WOW:

2. To dread or not to dread: Chicago White Sox Manny Ramirez. You have heard it a bagillion times from teammates, coaches, and administrators that have dealt with this enigmatic heavy hitter: “Oh, that’s just Manny being Manny.” But, part of “Manny being Manny” is his lengthy dreadlocks that he has been sporting since he was a member of the Red Sox. Now, we have all been made very aware of Manny’s adventure the past few days from being a Dodger in LA LA Land to being on the White Sox in Chicago… the thing the public may not be super aware of is the White Sox strict clean cut appearance standards. Joe Torre tried to get Manny to cut his hair back when he joined the Dodgers in 2008 and was forced to settle with a slight trim. White  Sox owner Jerry Reinsdorf may be in for a challenge when (or if) he tries to go toe-to-toe with Manny about his dreads. If I’m the White Sox though,I know I am trying to make a playoff push and just obtained one of the leagues most known power hitters… I’m thinking I’m gonna let “Manny be Manny” so that he is comfortable and starts hitting some dingers for my ball club. A compromise could be worked out to satisfy both parties: Manny has been known to fold the dreads in half and pin them up or he could wear his locks wrapped up in a bandana. No hair cut for Manny AND the organization has a clean cut looking player during games and team functions. Tada! Check it out:

3. Team bonding: St. Louis Cardinals. Forget rally hats, the Cards decided it was time for rally haircuts! Since falling 5 games behind division leaders Cincinnati Reds, the Cardinals decided in a closed door players only meeting that it was time to figure out a way to jump back in the NL Central race. Their conclusion: less may lead to more. Hair that is. In an act of team unity, the Cards came out of the visiting clubhouse with freshly shaved heads. Several players were understandably reluctant to bust out the buzz (reliever Mitchell Boggs is scheduled to get married in a couple months… Uh, sorry honey!) but ya gotta do what ya gotta do for the good of the team, right?! I love these kind of team unity things, it just seems to bring everybody a little closer and shows the passion a team has to make a change. Manager Tony La Russa said he was digging the team’s new ‘dos because they were so ugly he wouldn’t have to worry about his guys staying out late at night. Unfortunately for the Cards, their first post-shave game resulted in an L. Better luck next game barber birds.

4. Tantalizing Tebow: Denver Bronco Tim Tebow. This look doesn’t need much explanation, the picture speaks for itself. As part of rookie “hazing,” (ya’ll know my feelings about rookie “hazing”… just read my post about Dez Bryant below) Tim Tebow got a ridiculous Friar Tuck inspired haircut from his veteran teammates at the beginning of training camp. It has since been shaved off, but it was SEX-AY while it lasted! 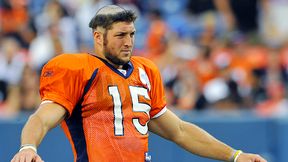 What do all of these current or former professional athletes have in common? They all left college prematurely to pursue their professional careers… and they all have already gone back or are in the process of completing their coursework to earn degrees from their respective universities. Recently, more and more professional athletes are using their off-seasons to return to the classroom. Halelujah, these guys GET IT! Don’t get me wrong, I’m not saying it’s necessarily “right” or “wrong” to postpone an education to pursue a professional career, I understand there are pros to postponing a professional athletic career and to postponing an education, but I think it is important to, at some point, complete your education. You have to prepare yourself for a life after your body gives out on you, which unfortunately, is inevitable in the world of sports.

Obtaining an education AND having a successful professional career can be done, people! True student-athletes should go to college to not only excel on the field (or court, or floor, or track) but also to excel in the classroom and ensure a stable after sports future by receiving an education. There is a reason why it’s student-athlete, not athlete-student. Education+athletics=success. The key to this formula is putting in equal time, effort, and discipline into athletics and schoolwork alike whether it’s before, during, or after playing in the pros. If you have the opportunity and potential to have a successful pro career, but the window of opportunity happens to be after your sophomore year of college, by all means go for it as long as it makes you happy! BUT, in my opinion, make a plan to finish school and stick to it. Professional careers can be cut short for a plethora of reasons: injuries, bankruptcy, being cut… and if you don’t have an education, then what? An educational plan is imperative in order to continue being successful in life. Plus, it’s such a feeling of pride and accomplishment when you get that diploma! (I’ll have that experience in June, but I hear it’s AWESOME!) Upon graduation Shaquille O’Neal was quoted as saying: “It puts a stamp on me as an educated man.” Aikman quipped: “I’m glad I came back and went through the ceremony.” It’s COOL to graduate ya’ll!

Every athlete demands the best of themselves on the field, so why should that demand of integrity and excellence not be applied to the classroom as well?

Welcome to WordPress.com. This is your first post. Edit or delete it and start blogging!

Check out the "About Me" section above to learn more about yours truly :)